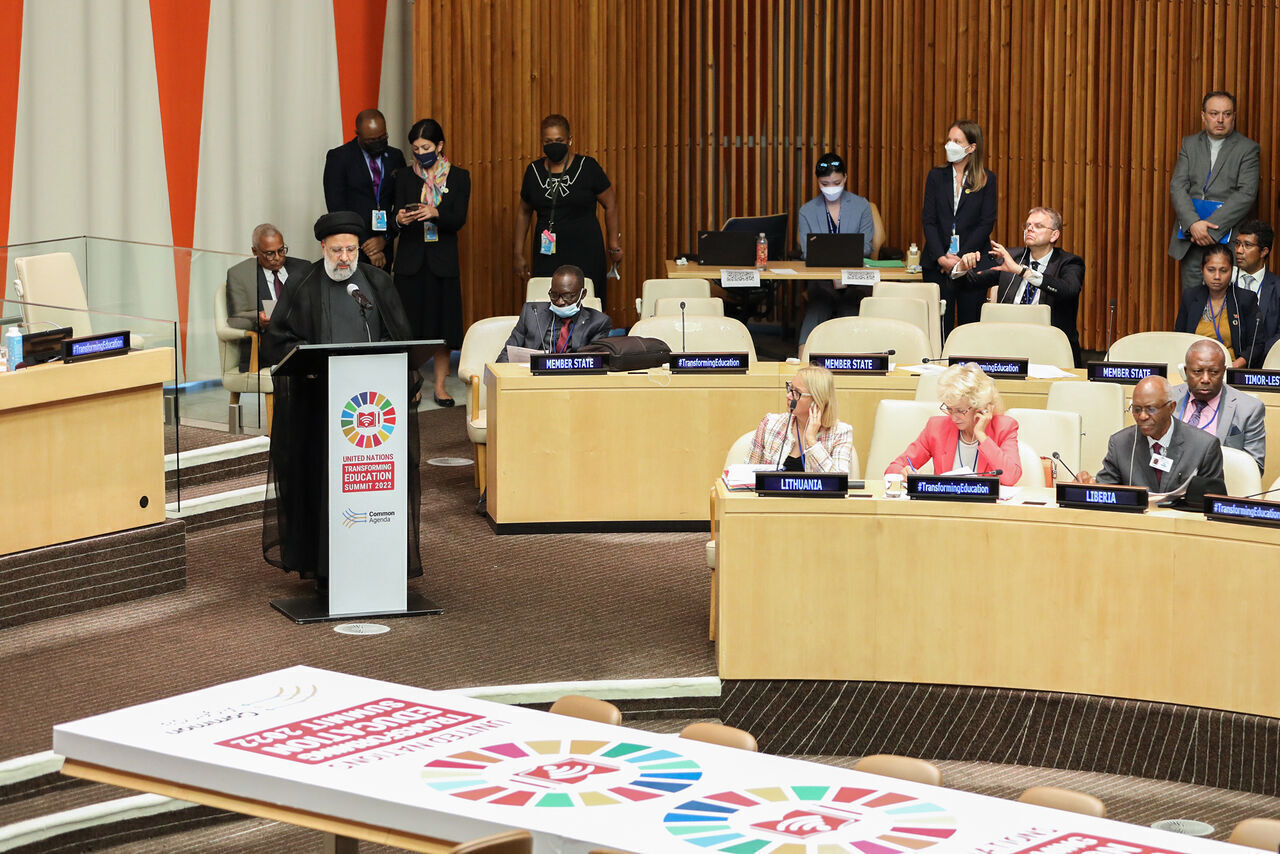 President Raisi made the remarks in his speech at the Transforming Education Summit held in New York on Monday afternoon with cooperation of the United Nations Educational, Scientific and Cultural Organization (UNESCO).

Heading a delegation, Raisi left for New York on Monday morning to attend the 77th session of the UN General Assembly.

In his remarks at the UNESCO summit, the president said development in education would not take place without paying attention to family, justice, and spirituality.

Website of the president released the full text of Raisi’s speech as follows:

In the Name of God, the Most Beneficent the Most Merciful

“The Almighty God appointed a Prophet from amongst the illiterate to read HIS verses to them and cleanse and purify them and instruct them in HIS Book and Wisdom, whereas they used to dwell in darkness before”

Human knowledge takes pride in Iranian scientists. Iran’s history of civilization started with science and knowledge and elevated by the Islamic culture which based its pillars on heavenly thoughts. The Holy religion of Islam is constantly inviting human beings to education with the aim of administration of justice and expansion of spirituality.

Progress and development are among the major concerns of all countries. Although on different occasions countries have implemented international recommendations and prescriptions in this regard, concurrently some serious challenges, too, have emerged for the indigenous and national cultures of the countries of the world.

We believe that in order to face the educational challenges, we need to identify their root causes. We have been fundamentally critical of the international bodies' reading and interpretation of the global contemporary history and their classification of issues. If our cause is to create a dignified life and a safe world, we should refrain from providing a unilateral gathering of globalization, and instead, emphasize on the role-playing of all parties within the framework of multilateral approaches.

In brief, the Islamic Republic of Iran believes that:

– Development, education, family, justice and spirituality should not be delved into as separate unrelated entities.

– Any initiative regarding development and satisfaction of human needs should also include educational and moral requirements as well.  At the same time, family should be placed at the center of the initiative. Of course, when we say family, we mean it in the real sense of the word and not self-made versions of family which lead to extinction of humanity.

– Development, when not accompanied by spirituality and ethics, will not be sustainable and will lead to degeneration of the society.

– Cultural dominance and knowledge blockade are the worst types of oppression and injustice.

We expect the international bodies to respect the right to cultural and educational sovereignty of all countries and to protect them against cultural invasion. We believe that educational transformation without paying attention to "family, justice and spirituality" would not be possible.

We should focus on moral values including honoring the family, respect to environment, justice, rejection of violence and extremism, creating a safe, moral, clean and efficient cyber space as our priorities for educational transformation.

Accordingly, the Islamic Republic of Iran has codified its educational transformation document based on Iranian-Islamic educational philosophy and, thus, has not solely relied upon the one-dimensional secular approaches mentioned in 2030 Document. With the aim of enhancing quality in Iran's new educational system, we have moved from focusing on a memorization-based curriculum to one based on research, innovation, skill acquiring and commitment to education and cultural and religious values.

While committing to its principled policies, the Islamic Republic of Iran also stands ready to ensure interaction dialogue with others within the framework of its educational system which is based on exalted and elevated human values.

Thank you for your attention.