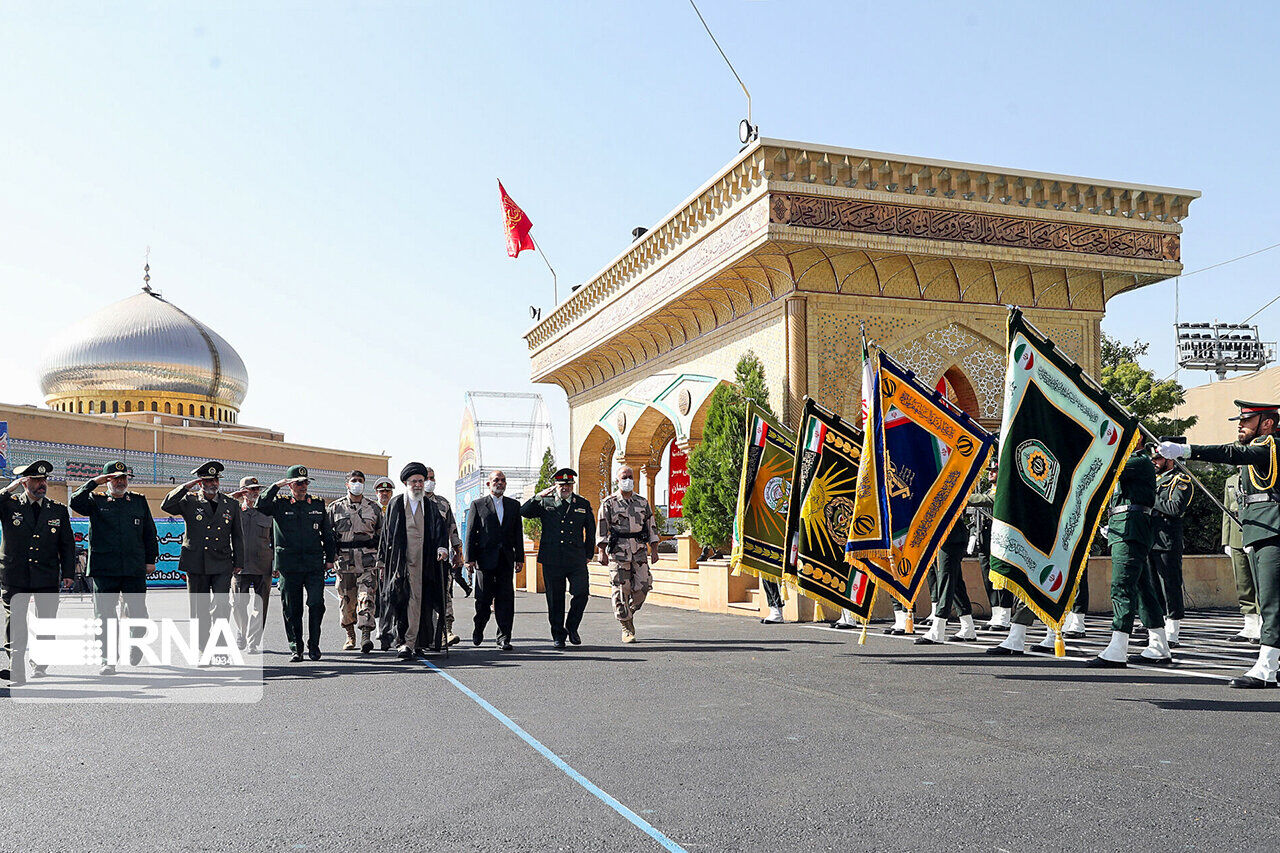 The Leader of the Islamic Revolution attended the joint graduation ceremony of the graduates of the Armed Forces Military Academies. In the beginning of his speech, he spoke about recent events in the country. The Leader emphasized, “In these events, the officers working in the country’s law enforcement, the Basij, and the Iranian nation have been wronged more than anyone else. Of course, the Iranian nation was present and very strong in this event too as it has been in other events, and it will continue to do the same in the future too.”

Imam Khamenei also stated that the nation of Iran has been wronged but that it is strong at the same time, like its Master, the Commander of the Faithful, Imam Ali (pbuh). He also said, “A young girl died in this incident, and this burned our hearts. But the reaction to this incident was not normal or natural. Without investigation and without it being clear what had happened, some people took to the streets to create insecurity. They burned the Quran. They pulled women’s coverings off their heads. They set fire to mosques, Hussainiyahs, and people's cars.

The Leader emphasized that the recent riots had been planned. He explained this by saying, “If there hadn’t been this case about this young girl, they would have created another excuse to create insecurity and riots in the country in the beginning of the month of Mehr (September) this year.”

In continuing his speech, the Leader of the Islamic Revolution spoke about the role foreigners have played in the country's recent events. He said, “I openly state that the recent riots and unrest in Iran were schemes designed by the US; the usurping, fake Zionist regime; their mercenaries; and some treasonous Iranians abroad who helped them.”

Imam Khamenei reminded people of the double standards of the US and the West with regard to the recent riots. He emphasized, “Many riots take place in the world. Every now and then, there are large riots in Europe, especially in France, and in Paris. But has the US president or the US House of Representatives ever supported the rioters and issued a statement? Is there any record of them sending a message saying that we stand with you? Is there any record of the mass media, which is affiliated with American capitalism, and the US mercenaries, such as some governments in the region like the Saudis, supporting rioters in those countries? Is there any record of the US announcing that they would provide some hardware or software for the internet to rioters so that they could communicate more easily? But such support against Iran has happened repeatedly.”

The Leader went on to say, “The American's expression of sorrow for the death of a girl is a lie. Contrary to appearances, they are happy to have found this excuse to create turmoil.”

The Leader of the Islamic Revolution raised this question in another part of his speech, “What is the foreign states’ motive for creating riots and unrest in the country?” He answered this by saying, “They feel the country is progressing toward achieving a comprehensive power, and they cannot tolerate this.”

The Leader also emphasized that foreign states have designed plans to busy the country’s officials in new issues in the north-west and south-east of the country. He said the following about this, “The enemy is wrong in its calculations about the north-west and south-east of the country. I have lived among the Baloch people, and they are very loyal to the Islamic Republic. The Kurdish people are also one of the most advanced groups among the Iranian people. They care about their homeland, Islam, and this system. Therefore, the enemy’s scheme will not work.”

In addition, Imam Khamenei emphasized that the US is not just against the Islamic Republic. It is also against a strong, independent Iran. He explained this by saying, “They are after the Iran of the Pahlavi era, which submitted to their orders like a milking cow.”

He continued on to say, “The issue is not the issue of the death of a young girl or the issue of hijab or incomplete hijab. Many women who do not observe the hijab perfectly are among the steadfast supporters of the Islamic Republic, and they participate in various events. The issue and debate is about the independence, resistance, strengthening, and authority of Islamic Iran.”

The Leader of the Islamic Revolution also spoke about the perpetrators of the recent riots in the country. He said, “These people who are creating corruption and who are damaging the streets are not all the same. There are some young people who take to the streets due to excitement from watching a program on the Internet. With some punishment, these people can be awakened to the fact that they are wrong. Of course, there are other people who come to the streets who are the remainders of those who were struck down by the Islamic Republic, such as the Munafiqin, the separatists, the monarchists, and the families of the loathed members of Savak. The Judiciary must determine their punishment in proportion with how much they have participated in the destruction and damaging the safety of streets.”

Imam Khamenei stressed the fact that the “inbuilt security” in the country is a great benefit. He said, “Our security has been built completely from within and without relying on others. This security is completely different from the security that is provided by others from the outside while they are looking at that country as a milking cow.”

He stressed that the security of the Islamic Republic of Iran is a result of its reliance on the power of God, the support of the Imam of the Time (aj), and the thinking and resistance of the nation and the Armed Forces. He also added, “If one relies on foreign powers, those same foreign powers will leave them alone one day. Because that foreign power neither wants to protect them nor can it protect them.”

In another part of his speech, the Leader of the Islamic Revolution talked about how several thousand young people join the Military Academies and organizations of the Armed Forces with enthusiasm and motivation every year. He said that this is great strength and good news, which brings a message of renewal and stability for the country. Furthermore, he said, “The presence of Iranian youth in various scientific fields, in economics, in politics, and in the military forces of the country is truly encouraging.”

Before the statements of the Leader of the Islamic Revolution, Major General Bagheri, Chief of Staff of the Armed Forces, spoke about the recent events in the country and emphasized, “The movements of some people who are either ignorant or insistent on creating insecurity should not doubt the proud movement of the honorable nation of Iran on the front of the truth.” He also said, “The Armed forces will play an important part in participating actively alongside the people with unity and solidarity in implementing the forward-looking directive and strategy of an active resistance.”