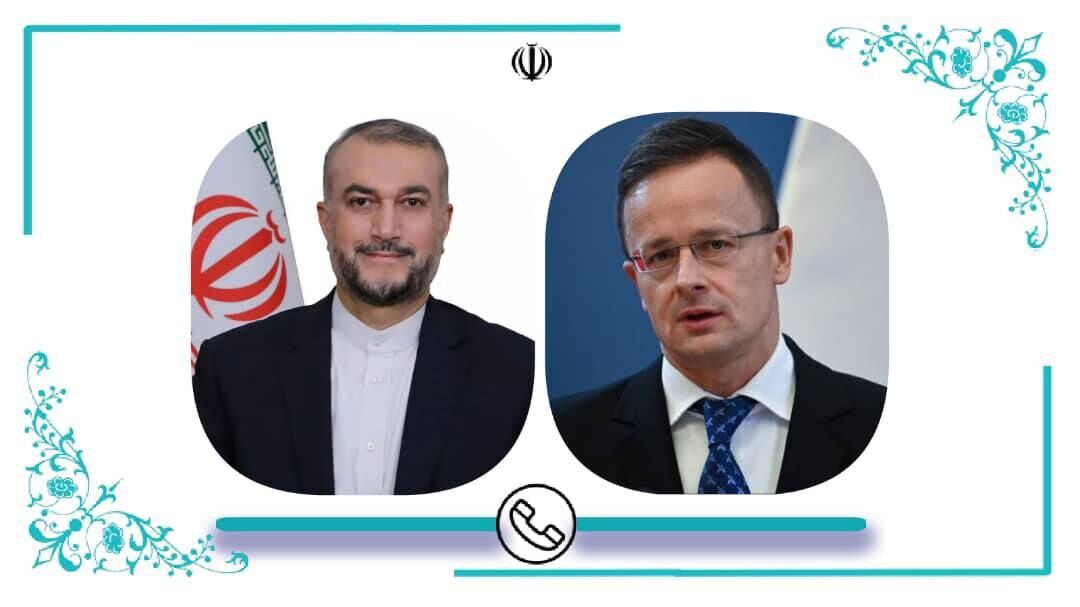 The Iranian foreign minister referred to the outcomes of his Hungarian counterpart’s visit to Tehran and the reached agreements, telling him that the Islamic Republic of Iran gives high priority to its relations with Hungary.

Amirabdollahian expressed satisfaction that the economic and commercial relations of the two counties are expanding, and said that the meeting of Iran-Hungary Joint Economic Commission in near future can provide an appropriate path for accelerating the expansion of bilateral ties.

He referred to Iran’s progress in various scientific and technological fields, including the peaceful nuclear technology, and its miscellaneous application in electricity generation, medical field, agricultural and industrial activities, and voiced Iran’s readiness for expansion of scientific and academic cooperation with Hungary.

Referring to Iran’s nuclear talks with world powers, the Iranian top diplomat said that Iran is determined to preserve its nuclear achievements, but meanwhile, Tehran favors reaching a good, sustainable, and quite serious agreement with world powers, through the EU mediation, hoping that the American side, too, will approach the matter rationally to facilitate fast return of all sides to an agreement.

He also said that the Islamic Republic of Iran favors a political solution to the ongoing war in Ukraine.

Peter Szijjarto, too, in the phone talk emphasized that Budapest, too, favors further expansion of comprehensive cooperation, and has always supported the Islamic Republic of Iran’s balanced approach in International relations and societies.

The Hungarian foreign minister agreed with his Iranian counterpart on the great role played by the upcoming Iran-Hungary Joint Economic Commission, adding to the visit of the two countries’ officials of each other’s capital cities, too, will contribute to comprehensive expansion of bilateral cooperation.